Introducing DSM-5-TR: What do you need to know? 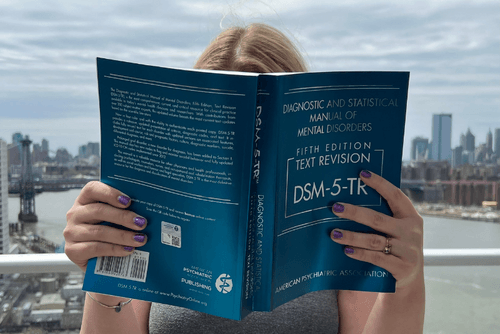 In March, the American Psychiatric Association (APA) released the DSM-5-TR, 9 years after it released the DSM-5. While headlines have focused on the addition of a new, controversial diagnosis called Prolonged Grief Disorder, we haven’t seen much about what the release of DSM-5-TR means for clinicians on a day to day basis. Back in 2013, I was an official trainer for the APA, traveling around the state of Massachusetts to give presentations to stakeholders about all the changes. It seems fitting that I would now share with Osmind clinicians across the country what this latest release means for you. While there is nothing earth-shattering, there are a few aspects worth noting, especially since patients may ask about them. Here’s what stands out:

Many clinicians and the press have been critical of the addition of Prolonged Grief Disorder, concerned it inappropriately pathologizes a part of human existence. The APA emphasizes it is reserved to describe an extreme, prolonged reaction lasting more than a year (or more than 6 months in kids) that is disabling for the individual beyond what would be expected based on their social, cultural and religious backgrounds. Proponents of the disorder note that having this disorder means research can be directed towards it. With respect to psychedelic medicine, there are a number of studies looking at compounds such as psilocybin and ayahuasca for prolonged grief, alongside psychotherapy designed especially for grief. Should you choose to incorporate this nomenclature in your practice, Prolonged Grief Disorder can be billed under the ICD-10-CM code F43.8:Other reactions to severe stress. Within Osmind, because the ICD-10-CM description does not say “Prolonged Grief Disorder” you could  include that description in the comments.

While Prolonged Grief is the only truly new disorder, there is a new category in Section II for Other Conditions that May Be a Focus of Clinical Attention to flag and monitor suicidal behavior and nonsuicidal self-injury that may or may not be associated with another diagnosis. For the initial encounter for someone with suicidal ideation or attempt, use ICD-10-CM code T14.91XA. For subsequent encounters, use T14.91XD and for a history of suicidal behavior, use Z91.51. When a patient first presents and indicates on their intake they have had prior suicide attempts, you can add this diagnosis to the diagnosis list in Osmind. Given that past attempts are a strong risk factor for future attempts, documenting this through the use of a code seems prudent. Along the same lines if someone is endorsing current non-suicidal self-injury (NSSI), use R45.88 and if they have had NSSI in the past, use Z91.52. In addition, for each diagnosis within the DSM-5-TR there is a new section entitled “Association with Suicidal Thoughts or Behavior,” when information is available in the literature on suicide risk for that particular diagnosis.

When DSM-5 was released in 2013, one diagnosis that was quite popular in outpatient practice was removed: Unspecified Mood Disorder. If you have been longing for its return, the APA has good news! Unspecified Mood Disorder is back in all its vague-yet-useful glory. This is meant to be used as a provisional diagnosis as part of the assessment process. The corresponding ICD-10-CM billable code is F39.

Throughout the 1000+ page book, there have been extensive changes to reflect the impact of racism and discrimination on mental disorders, a key priority for the DSM-5-TR Cross-cutting Culture Review Committee. There was also a separate Work Group on Ethnoracial Equity and Inclusion that reviewed the content and made recommendations. These include changes in terminology such as use of Latinx instead of Latino/a and racialized instead of racial. The terms Caucasian, minority and non-White are avoided because they tend to perpetuate social hierarchies and the terms cultural contexts or cultural backgrounds are preferred to culture. Throughout the text there have been efforts to incorporate more information on social determinants of mental health, but electronic health records have historically done a poor job of tracking information in a standardized way on social determinants of health. At Osmind, we are currently working on updates to our intake form, patient profile and note templates that will make it easier for clinicians to incorporate a patient’s cultural context into their care and to consider the impact of social determinants of health.

The entire Gender Dysphoria chapter has been overhauled to reflect updated culturally sensitive language. For example, the term “cross-sex medical procedure” has been replaced with “gender-affirming medical procedure,” “desired gender” with “experienced gender” and “natal male/natal female” with “individual assigned male/female at birth.” There is a growing body of evidence on the importance of collecting sexual orientation and gender identity data in electronic health records. At Osmind, we are also making updates around the documentation of gender and sexual orientation to be both more affirming and inclusive.

In addition to diagnoses, the DSM-5-TR contains a number of measures and diagnostic tools useful in day to day practice. All of the measures and the Cultural Formulation Interview are available for free at www.psychiatry.org/dsm5. One helpful self-administered measure recommended by the DSM-5-TR is the World Health Organization Disability Assessment Schedule 2.0 (WHODAS 2.0). Each item asks how much difficulty the individual has had in a specific area of functioning during the past 30 days. This measure is also available directly in Osmind.

When it comes to coding, there are annual changes to ICD-10-CM codes so it is no surprise that many of the codes listed in the original DSM-5 are out of date. The DSM-5-TR removes separate “DSM” codes for disorders and instead uses only ICD-10-CM directly. In January of this year, the World Health Organization actually launched ICD-11 but the United States does not plan to adopt ICD-11 until 2025 at the earliest and more likely not until 2027. Therefore, the ICD-10-CM codes listed in the DSM-5-TR shouldn’t ruffle any feathers as you enter diagnoses for billing purposes. There have, however, been new ICD-10-CM codes since 2013. For example, there are over 50 coding updates for substance intoxication and withdrawal and other disorders. Here are highlights of the most notable coding changes:

At Osmind, we update relevant diagnostic and billing codes whenever new changes take place so when using our platform, as long as you are clear on what you want to document conceptually, you do not have to worry about the exact code being the latest one.

We hope this overview of changes to the DSM-5-TR will help you and your patients in your work together and we will update you about any major revisions as the field and cultural landscape is constantly evolving.

Dr. Carlene MacMillan is Vice President of Clinical Innovation at Osmind. She is the founder of Brooklyn Minds Psychiatry, a multidisciplinary team-based, multi-site practice in New York City. Her practice was one of the first to offer deep TMS for OCD and esketamine for severe depression and suicidal thinking.

Dr. MacMillan is an expert in mental health communities, with a large following on platforms including Clubhouse (@psychiatrist), where she champions awareness of evidence-based and innovative approaches in psychiatry. She is a member of the Ketamine Taskforce for Access to Safe Care and Insurance Coverage, and the Clinical TMS Society Insurance Committee. She is the Co-Chair of the American Academy of Child and Adolescent Psychiatry Consumer Issues Committee.